Economic Downshift – Are We Even Moving?

The latest U.S. economic numbers for February point to a downshift in economic activity from an average of 2% “new-normal” growth since 2009. In particular, two data points issued in recent days show a marked downshift in the economy in the current quarter, Q1-2016.

The first series is Durable Goods Orders, updated on Mar 24th. Excluding volatile transportation, orders declined by 0.1% MoM in February – continued sluggish pattern that has been in place since late-2014 – see 5-year chart below. 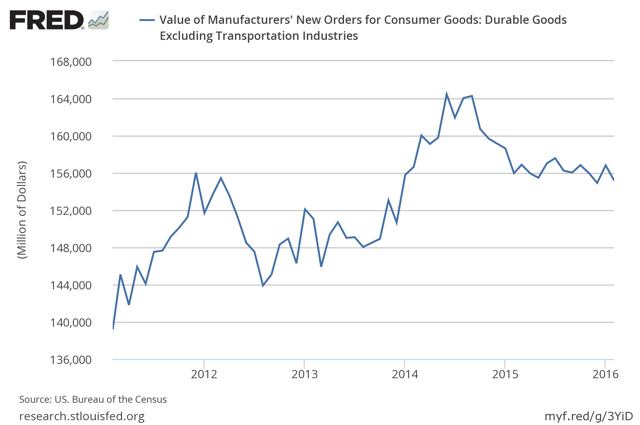 The 20-year chart gives longer-term perspective for the same series, and also for industrial production which is correlated with orders but is less volatile: 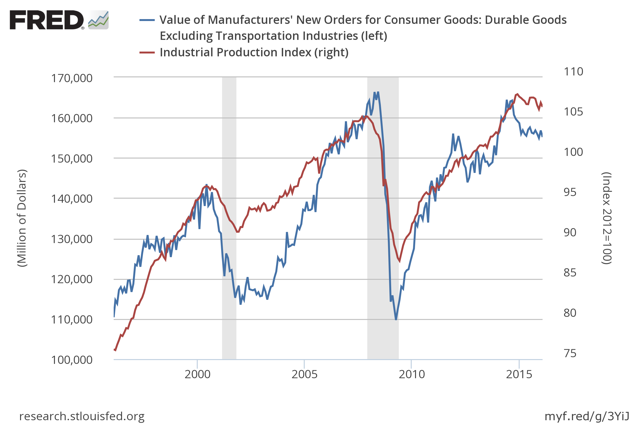 You might observe that sluggish patterns in manufacturing like what we’ve had since early 2015 only happened ahead of, or during, recessions (shaded areas). And you’d be right: a sustained (lasting longer than a month) YoY decline in industrial production which wasn’t followed by a recession, happened only once since records began in 1919 – in 1952. Then, as now, production declined vs. previous year for four consecutive months. Optimists say that manufacturing now accounts for much smaller portion of the economy, and that current slump in the value of industrial output is largely driven by the plunge in energy and materials prices. Both true, and reasons why the US economy hasn’t slid into a recession, as far as we know.

The second series is personal income and spending data released on Mar 28th. Household spending rose by a slow 0.1% in February. More importantly, January spending was revised sharply lower from +0.5% estimated previously, to only +0.1%. So, as much as consumer spending (which accounts for 70% of our economy) previously offset the decline in manufacturing, it is now also slowing down.

These recent data points have significant bearing on economic growth. Earlier this month, the Fed’s GDPnow model had estimated Q1 GDP growth to be between 2.3% and 1.6%. But based on these recent data releases, the model’s estimate dropped sharply to 0.6%, see chart below. 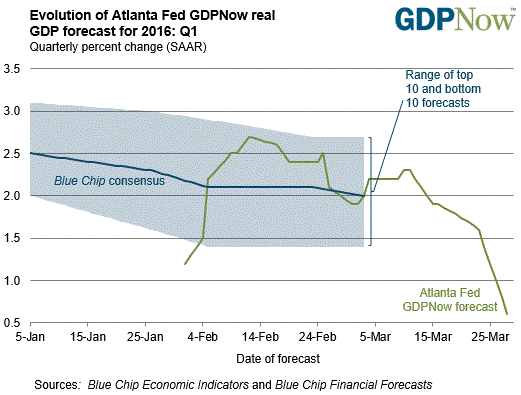 Though GDPnow’s estimate has its limitations and might still change, real growth of the U.S. economy appears to be slowing down sharply from 1.4% annual rate in Q4-2015 (which was already slow).

Not all data look bad. Regional Fed manufacturing surveys all showed marked improvement in March (see chart below). This prompted Goldman Sachs’ research analyst to say that U.S. manufacturing has “turned a corner” and US manufacturing recession may be over. The ISM survey for manufacturing might confirm it this Friday. But the surveys may simply reflect improved sentiment following the rebound in oil and other commodities – we’ll have “hard” data to confirm this one way or the other only at the end of April. 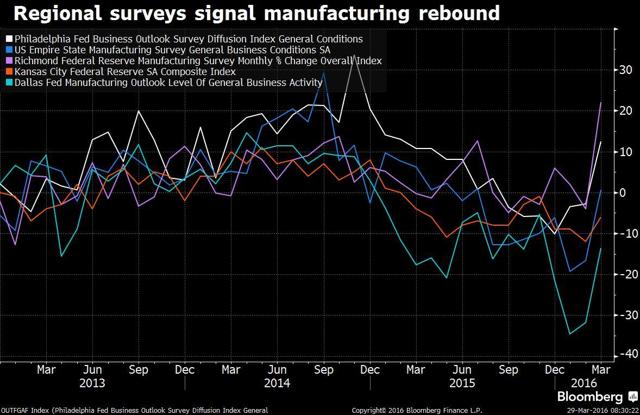 What does it mean for asset allocation? Janet Yellen put a very dovish tone on her remarks in FOMC press conference on March 16, and again yesterday. Should the economy slow down, the Fed is prepared to do more of the same stimulus that it provided since 2008. So, if the economy does slow down in Q1 as GDPnow suggests, the Fed will backtrack and reduce the pace of its interest rate hikes from two that are expected this year, to one or none.

Bad news has been good news recently as equity investors expect the Fed continue to support asset prices. As I argued here, the Fed itself is one of the reasons for the slowdown, and the view that its policies are losing effectiveness is slowly gaining traction. A downshift in Q1 economic growth would add even more pressure on corporate top and bottom lines (already expected to decline in Q1), in the face of elevated valuation. I would continue to manage equity risk carefully (SPY, IVV, QQQ, VTI, etc.), and to maintain these exposures at the low end of one’s target allocations.

Reduced pace of interest rate hikes will reduce US dollar attractiveness. I would not short USD (UUP) outright, but think that current consensus for continued USD strength vs. EUR (EUO, FXE) and JPY is no longer justified.

Disclosures: This article is for information only, does not constitute investment advice, and represents opinions of the author and not necessarily of Model Capital Management LLC. Investors should independently evaluate particular investments and strategies, and/or seek individual advice of an investment advisor. There are risks involved with investing including loss of principal. There are no guarantees with respect to performance or outcome of any security, investment strategy, or projection made or discussed in this article.