How Much Do We Owe?

In light of rising interest rates and the new President’s proposed infrastructure spending plans, debt is beginning to get some attention. But how much do we already owe? Most readers probably know that the United States government amassed over $19 trillion in Treasury debt, roughly 100% of our GDP.

But in fact, that’s only part of our obligations. In aggregate, we owe $62.6 trillion in non-financial debt as of Q2-2016 (see charts below). Households owe directly $14.5 trillion, the largest part of which is mortgage debt. Businesses and state/local governments owe commensurate amounts. The largest portion is Treasury debt, $19.4 trillion as of June 30th (up to $19.9 trillion today).

Federal, state and local debt are liabilities of taxpayers, albeit indirect. Debt is mostly owed internally within the U.S. A smaller portion is external – for example, $6.2 trillion of Treasury securities is held by other countries. In addition to this, there’s financial debt and derivatives on the books of financial institutions – I’m not including it in the discussion today both because data is not readily available, and the true exposure for derivatives isn’t clear. I’m also excluding future obligations of the government (i.e., of taxpayers) – for example, Social Security and Medicare.

Sources: for Federal debt – the U.S. Treasury; other debt – Federal Reserve, yearly before 2010, quarterly thereafter. Data as of June 30, 2016. Chart and calculations by author.

Households were the only borrowers that de-leveraged after the financial crisis – household debt first dropped after the financial crisis, and increased by only 9% in 10 years. Business debt grew by 47% in that period. But government took up all the “slack”: Treasury debt grew by 123% in the past decade through June 30th, and state and local debt rocketed by 168%. In effect, debt shifted from household balance sheet to the government’s balance sheet – but continued to grow in total at above-5% annual rate.

Government debt at 104% of GDP is now the highest since World War II when it reached 120% of GDP. Total debt, at 337% of GDP, is near all-time high (some government data shows that it receded from 2009, though I’m not yet sure about the quality of the data).

The good news is that interest payments (debt service) have actually dropped since 2008. Household debt service now constitutes only 10% of disposable income, down from 12.75% in 2008 (see chart). It’s stayed low due both to low rates and to disciplined de-leveraging by households. At the federal level, despite much lower average rates, interest already makes up 6% of government expenses as government debt ballooned. Interest is now the fourth-largest federal budget category. 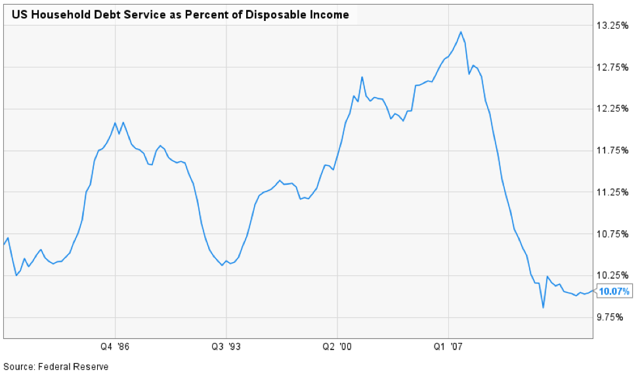 The massive amount of debt isn’t necessarily a problem in itself. But as a (supposedly) fiscally-responsible society, we owe it to ourselves and to future generations (who will pay most of it) to make sure that the situation is sustainable not only in the 1% Treasury rate environment, but also with higher interest rates.

With Treasury yields up, interest rates at the household level are beginning to rise. For example, average 30-year new mortgage rate is up to 4.08%, the top of its 2-year range:

Higher rates are viewed as a drag on the economy, but the full extent remains to be seen. Mortgage applications, a measure of home financing, declined in the past few weeks, but the drop is not dramatic, at least not yet. On a 3-week average basis which smoothes volatility, applications are down 4.4%, the 6th largest decline in two years.

I will continue to update you on the economic effect of higher interest rates – stay tuned.

Here is performance for popular bond index ETFs since June 30th. As always, bond gains/losses are proportional to their duration:

Where next? The trifecta of market forces that drove rates higher, continue to be at work for now. The rise in yields brought them closer to attractive levels, but not there yet, in my view – please stay tuned.

If you are a regular reader of MCM’s Tactical Strategies reports, you had an advantage of our timely recommendation earlier this year to stay away from longer-term bonds, along with recommendations for high-quality income ETFs with no exposure to interest rates. Learn more about our fundamentals-based, forward-looking approach to tactical investment management. If you are an advisor and are interested in adding a tactical component to your practice, please contact us to begin receiving the report.

Additional disclosure: Roman Chuyan is the president and general partner of Model Capital Management LLC, a Registered Investment Adviser. This article is for informational purposes only. There are risks involved in investing, including loss of principal. Roman Chuyan makes no explicit or implicit guarantee with respect to performance or the outcome of any investment or projections made by him or Model Capital Management LLC. There is no guarantee that the goals of the strategies discussed in this article will be met. Information or opinions expressed may change without notice, and should not be considered recommendations to buy or sell any security.