U.S. Economy Is Now In Stagnation – What’s Next?

The International Monetary Fund cut its 2016 global growth forecast by 0.2% last week in its World Economic Outlook. The IMF warned of “the risk of a world economy that reaches stalling speed and falls into widespread secular stagnation.” Economic data released since the IMF report shows that the U.S. economy deteriorated further in March, so Q1 GDP growth already reached stalling speed. So, are we already in stagnation?

According to the Federal Reserve Bank of Atlanta’s GDPnow model, real GDP growth slowed almost to a halt in Q1, with annual growth now estimated at only 0.3% (see chart below). This compares with 1.4% growth in Q4-2015, and with 2.2% average growth during the expansion cycle that began in 2009. 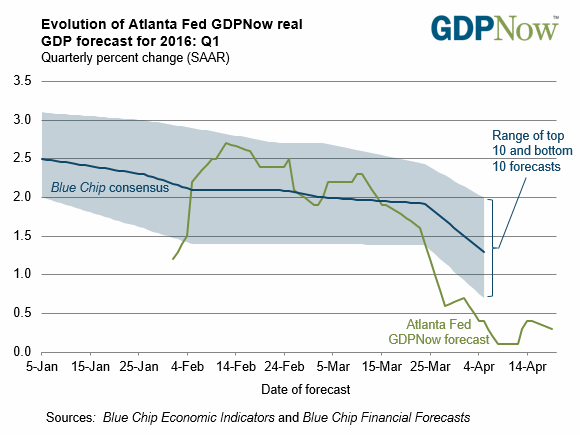 What factors reduced GDP growth? We can see from the chart below that consumer spending (Personal Consumption Expenditures, PCE) is still the largest positive factor in Q1 GDP growth, and the two primary negative contributors are Net Exports (the strong U.S. dollar plays a major role here) and Change in Private Inventories. 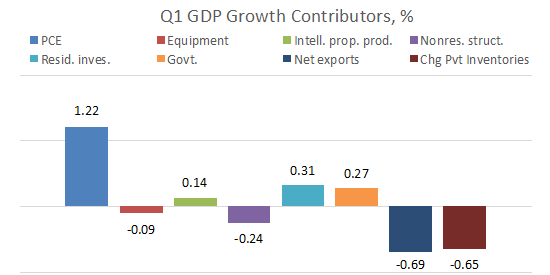 Speaking of inventories, they have expanded sharply in the past two years, taking the total private inventory-to-sales ratio to 1.41 – its highest in 15 years outside of recessions (see chart below). The “normal” inventory ratio had declined to 1.25-1.30 in the early 2000’s when new, more-efficient retail and inventory methods (online retailing, etc.) took hold. Inventory expansion temporarily boosts GDP growth as goods are produced and stored. You would think that classic industrial-age over-production cycles are history, but here it is.

Judging by significantly negative contribution to Q1 GDP, a reversal began in Q1, while not yet significant to even make a dent in the ratio. This will continue to be a headwind for future GDP growth as excess inventories are worked off. 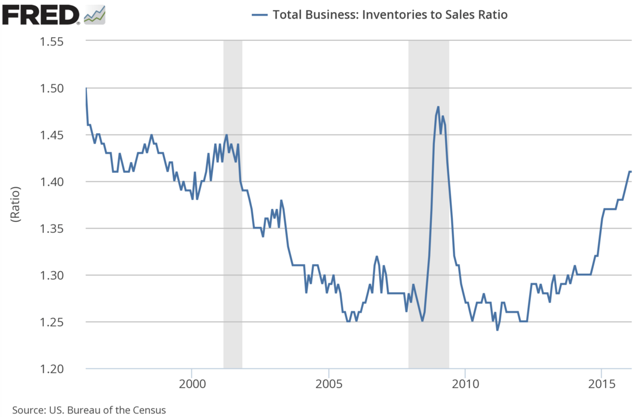 Finally, as regular readers would recall from my previous post, I was wondering if “hard” March manufacturing data would confirm the positive ISM Purchasing Manager survey. It didn’t. Industrial production dropped by 0.6% in March, and manufacturing ex-energy dropped by 0.3% (see chart below) – the lowest monthly change in a year and well below consensus expectation of 0.1% growth. Some analysts were calling for an end of the manufacturing recession based on the strong ISM reading, but it proved to be a false start. I think that positive ISM numbers were simply driven by producer’s optimism about the rebound in commodity prices. 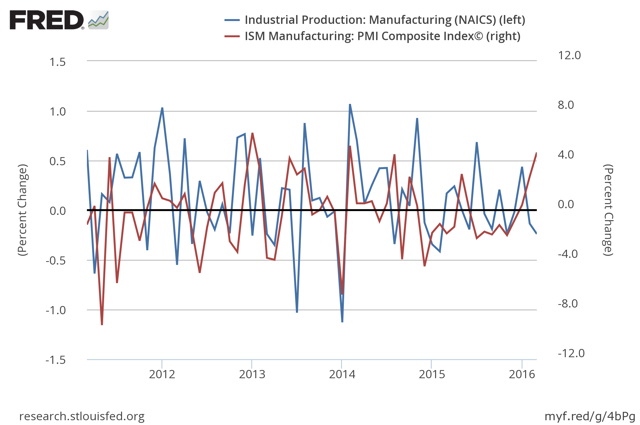 The timing of this economic stagnation could not be worse. the Fed has expended its ammunition after $4.5-trillion bond-buying QE program, and cutting interest rates as low as they could go. Investors, however, remain sanguine. Secular stagnation, anyone? Investors couldn’t care less and continued to move into risk assets in April, propelling the S&P 500 and MSCI ACWI index ex-U.S. into positive territory year to date. Irrational behavior can continue for a while – we’ve seen this before, in 2000 and in 2007. Economic deceleration has so far been slow and almost unnoticeable – like the proverbial boiling of a frog – but has accelerated in the second half of Q1. As far as markets go, I think we’re approaching an inflection point as the earnings decline and deteriorating U.S. economy leave little room for optimism.